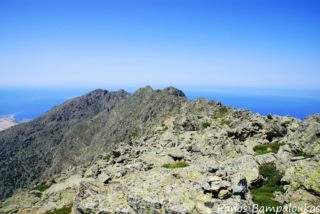 The Highest Peak of the Island is the Saos Mountain, meaning savage, healthy, savior. That’s because, because of his height, he saved people when the Dardanus cataclysm. And it can boast that it is the highest mountain in the Aegean, as its peak reaches 1,611 m as if it touches the Moon, hence its name. Because of this, the island’s territory is mountainous, covered with forests and valleys, with many running waters. On top of Moon’s Moon, the gods of Olympus ascended to watch what was happening in Troy! 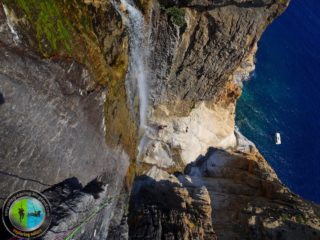 Pendant Water is located on the south coast of the island and is only accessible by sea. It is said so because it is a waterfall falling into the sea! (To go on this planet to see another place where waterfalls fall into the sea, you have to travel to Greenland!). In winter, due to many waters, the cataract does not lick the rocks and falls into the air. Hence his name. This cataract is recorded as the highest in Greece, 4th in Europe and 11th on the planet, after falling from a height of 180m! 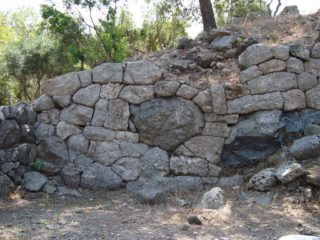 In the archaeological site, to the east of Neorion, to the Temple, there is a strange rock (approximately 1.20×0.80 m.), Which protrudes from the ground and was incorporated into the later built wall (3rd BC) of unknown use Room. The wall is made of elongated blocks, apparently Mycenaean style. In 1990, visiting the archaeological site, the gynecologist Dr. E. Leontidou, he noticed the rock, and he identified the shape of Samothrace! A comparison of the rock was made by the Dutch philhellene musicologist J. Munsey and the scholar J. Kurtich, who concluded that in most of his points he is really identified with the map of Samothrace! If so, it will be the oldest map of the world!

The ancient insubstantial and enthusiastic beings of Koravans, priests of the Great Mother Goddess Ma, wore a helmet. That’s why Euripides tells them triviality. They wore it both when they danced, but when they were walking, as Strabo says. The chieftain’s peak was celebrated by the Tiara. And because with the Salih priests the best worship passed to Italy, a remnant of them remained to be called the Tiara and the Otter of the Pope of Rome! In other words, the top symbol of the pope, originated from the ancient Greek religion of Samothrace. 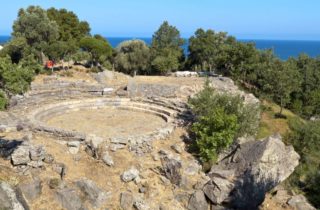 In Samothraki, a sacred center of the time, the Kaviris acquire their main substance and place. Here the following Kavirs were worshiped: The Great Mother-Aquarius (Dimitra), Achikoksara (Persephone), Achikokeros or Hades (Hades) – was portrayed as a bearded man with a dark garment. The divine couple Axioserosos – Achioskeras accepted libations, offerings and sacrifices to a Hole in the soil, as the chthonic deities that were. And they were crazy because they came to heaven from heaven. “Fallen” on Earth with ordered service: To install a “new order of things”, we would say today. And they begin to teach the “circle of unification” (Plato, Plotinos): Axioskeros grabs Axioskeras, but she returns. This was played and taught in Mysteries. The “coveted” victory of light over the dark. The eternal rotation of seasons, times, cycles. And: Kassilos or Kadmilos (Ithafalos Hermes, the “sacred myth”, fertility god, “adherent” to the Great Mother Goddess, depicted in her, perhaps, the husband of Axir, who was only explained at the beginning). So we have two gods and two goddesses in the ancient Pantheon of Samothrace. 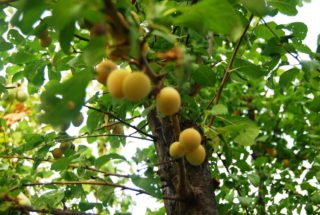 Praxi or prastiti is an intermediate tree fruit, a local yellow-green local fruit between plum and wild. They say so because it appears and matures “before August”. Prastiti is the traditional sweet of the spoon of Samothraki. And here’s how they make it: They peel it off, take it out and put it on the lime, about 30. Then rinse and boil it. For a pound of praxi, less than a kilo of sugar is required. 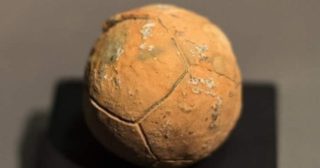 In Samothraki, the custom of the burning of the dead was confirmed, at least for the 5th-6th centuries BC. C. Subsequent tombs (4th-3 rd BC) bear gifts. The impressive finding of a small clay representation of a sphere, consisting of a wrap, in which a balloon was installed, just as it is today with the balls! It is exhibited at the Archaeological Museum of the island. This is the first ball testimony, in its modern form, in the world!

The first written conception of the triad is that of Ferekidis, from Syros, the teacher of Pythagoras: “You and your time were alive and holy.” But always before the writings, there is thought. And the thought of triadness was born in Samothraki: The Cavers in Samothraki established a strange religious triadicity, with Hephaestus, Dionysus and Athena, in a later performance. (It is also proved by coins of Hephaestus and Samothrace).

In the very old days, the word “rel” (renaissance, palace, etc.) was the top position of the political pyramid of a place. The names of the gods of Samothrace were not acceptable to the faithful. That is why they called them all except for “great gods” and “unrecognized” or “unrecognizable” (From these recoveries came the Anakim of the Phoenicians). Here we have another global avant-garde of Samothrace, since here the first word was used, as we are today.
For the order of things, the king was the 8th in the hierarchy of a land lord, the one who communicated with the base (the people) and brought to their superiors their desires. Over time, the king persuaded the people that he did all the work and that he did not need his superiors, whom the people had never seen before. So slowly, slowly, one of them abolished them. And he remained the first prince! 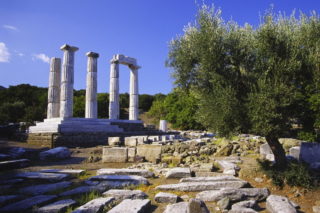 In the archaeological site of the Temple of the Great Gods in Samothraki there is also the dome, a tribute (288 / 89-285 / 81 BC) of Queen Arsinoe, wife of the king of Thrace, Lysimachos “hence Arsinoeio” built on An earlier building of the 7th century BC C. Queen Arsinoe when he split with Thracian king Lysimachus, came to Samothraki, where he fell in love with Ptolemy. Above the entrance was the votive inscription of the Queen of Thrace surviving to this day. To the right of the entrance there were two small altars and a square space, with water, for the libations. The diameter of the dome is more than 20 m and its height exceeds 12.65 m. This makes it the largest circular ancient building of Greek architecture. In the upper part of the high circular relief marble wall (height of 7 meters) was externally decorated by a series of 44 Dorian posts (pentagons) -passes (2.85 m high), among which there might have been windows, through which was illuminated internally The edifice. They were subjected to a large dimension of Doric entablature. In the cornice of the gutters, which resulted in lion heads and coverings decorated with pearls. Above the dome, painted marble railing! The dome was built of Thassos marble. The French Coquard in 1866 described it as “the brightest building of Greece!”.

The same fingers were specially related to metals. Besides, the actual finger was nothing more than an iron, strongly magnetized, which was used in the temples, by special doctors-doctors, the “private doctors” for therapeutic purposes. The Great Mother, moreover, was worshiped on certain rocks, so magnets, which had caused the interest of the ancient, and on them magnetised various iron holy objects. They used to say that perhaps for the first time the magnet appeared in Samothraki, as the Great Etymological is testifying.

Samothraki not only gave the worship of Kavers. She also gave her the fate of the fortune and the sinning of the mortals, the goddess of fortune, whose worship in her temples, the Random, always hid mysteries. From here it was spread to the rest of Greece and to Italy, mainly during the successors and the Romans. And why was she worshiped first in Samothrace? But why Luck (and Chryssi) was a partisan with the Kore / Persephone, who was worshiped in particular on the holy island. And why, as a goddess of happiness, she was the one who loved the Kavireas, who taught the inner harmony and happiness. What? This is what Pathia Fat got to be honored with the Great Mother / Earth in the Kaviera of Samothrace. 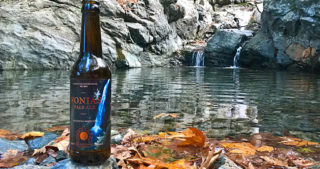 King Wear had made large jars of 300 kg of cereal, which he drank on the earth. This also shows their rich cereal production. The Sailors were the first to make a charming drink, the “withe”, “very harsh of berries, fruits and roots” (says Athineus and Archilochos), which is nothing but the known now; beer. The production of dwarf and wilderness is depicted in relief of Roman times, which is located in the Archaeological Museum of Sofia.

In Samothrace, the Thracian nation of Saïa was first inhabited, and it was inhabited on the Thracian coast. Samothrace served the Sailors as a stopover for their trade with Troy. Commerce consisting mainly of animal skins. In the land of Shia there was an ancient marsh mine (hydrated sulphate). This was used in tanning. And that made them unique. That is why in their Turkish language their memories have been remembered with the word “shiap” (Siapaioi = smypia) and “ciapse” (= dressing of skin).

The chief god of the Shia was Dionysus, a protector of their vineyards and their wine. The cultivation and distillation were taught to them by their king, Emmolpos. The wine caused them a headache. That’s why they tied their heads with tape (miter); Hence their Dionysus “Mitroforos”! The diadem of the Shia kings, believers of Dionysus, was the mitra, the later crown. From their extreme drinking, they often banged or clashed, breaking hands or feet. At that time they used their wooden barrel rods or the short of the doors for “narthex”, becoming the first heaters of this orthopedic aid.

The sacred animal of Sailor was the horse. These were the first to train horses for battle. The help of the king of Thraces Rissos to Primo, with white trained horses, was made from the pavilion of Sapaia!

From the root of merit, the worthy, ie the saint, emerges. Thus we can say that the first saints were born in Samothraki. Institution adopted by them all the religions of the world. The first synthetic “merit” also denotes the ax, the ax, the tools that were of value at that time.

Being afraid of the wrath of the god, which was expressed by the cataclysm, the Dardan left Samothrace “on ravine” because we are talking about so old that “the use of the ships still did not exist” (“ships for the sake of use” ! Indeed, in order not to drown, he swirled his coat, so that in case of a shipwreck he would float. That’s why some have surrendered that he did not rescue himself with a raft, but with a leather pouch, which he performed! So he became the first survivor of the life jacket!

In Samothraki, in the West of Kamariotissa, a wind farm with wind turbines operates. But electrically the island is connected to Alexandroupoli underwater cable (24 nm long). 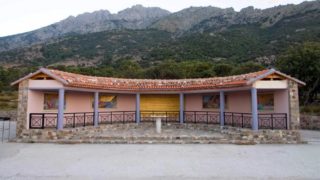 Incoming to the archaeological site of Gatueltsi, a path to the left then leads 50 m to the Early Christian Basilica of “Paul the Apostle”, visible from the coastal road. It was built in memory of the apostle’s visit there in 49 or 51 AD. Paul stayed in Samothraki only one night, on his way to Neapolis (now Kavala) and then to Europe. If that is the case, we should talk about the oldest preserved Christian church!