With its origins lost in the mists of time, much before the cataclysm of Deucalion…
“Now I will tell you the history of the Aegean islands beginning with Samothrace … The island inhabited by indigenous … it is said that in ancient times it was called Saonnisos … The Samothracian say that before the cataclysms described by other civilizations, there was another great cataclysm during which opened close to “cyan stones” (the mythical Symplegades) and then (opened) the Hellespont.

Because the sea of the Black Sea was first a lake that inflated to the point that the stream pressure flowed forcefully the waters to the Hellespont and flooded much of the Asian coastline and a large part of the plains of Samothrace turned into sea. And this is why in later years some fishermen retrieve with their nets stone pillars, because even cities flooded from the water. And those escaped from the cataclysm fled to the higher parts of the island.
But as the sea was rising ever higher and higher, they asked from the local gods to save them and when latter did, in memory of the event they raised stone borders around the island and built altars. So it is obvious that Samothrace was inhabited before the flood ”

Located on the north coast, west of the ancient city. The oldest religious activity is placed in the 7th century BC while the permanent structures dating from the first half of the 4th century BC particularly on the 3rd century BC The sanctuary was dedicated to the worship and the ceremonies of the Mysteries of the Great Gods that was famous during the Greek and Roman antiquity. The gods are referred by the name of Kabeiroi which still remain unknown and enigmatic.
The first survey made by the French Consul M. Champoiseau in 1863 at the Winged Victory Monument. Followed by two more French missions in 1866and 1891 in the hollow of the theater. The first systematic excavations were conducted in 1873 and 1875 by the Austrian A. Conze. Since 1938 the Sanctuaryexcavate the University of New York directed by K. Lehmann and then of J. R. McCredie. In 1956 five restored columns and the central architraves of the front of the sanctuary with the financial support of the Bollingen Foundation.
The most important monuments of the site are:
The “hall of choral dancers (Temenos)”, The Sanctuary, The Palace, The Dome of Arsinoe, The Sacred Circle The Propylon of Ptolemy II, The Stoa, The Palace, The the Winged Victory Monument. 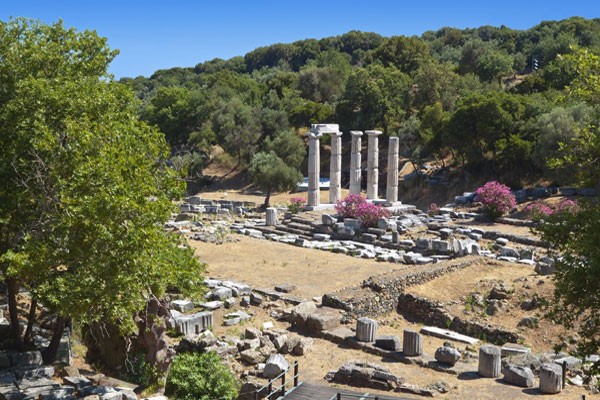 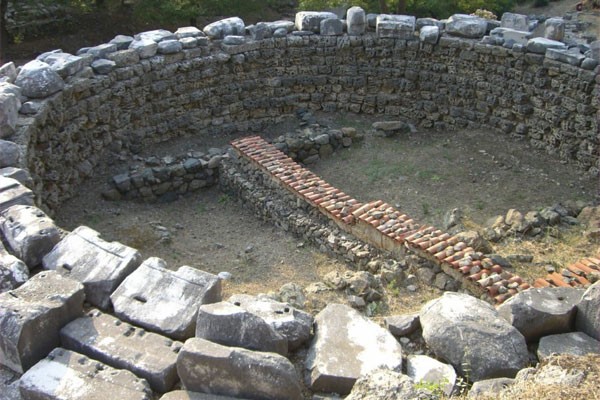 South of the Palace and next to the Holy House is the Dome of Arsinoe. The building according to the dedicatory inscription that is engraved on the architrave, it was dedicated by Arsinoe, wife of King Lysimachus, to the Great Gods and destined for sacrifices and official gatherings in the annual summer festival.
Dated to the period 288-281 BCE and is the largest known closed circular structure in ancient Greek architecture, an external diameter of 20 m. and 2.50 m thick foundation. the construction of the foundation was used limestone, while the superstructure Thassian marble.
The roof was initially scaly conical roof tiles and had in the center a marble cape decorated laurel leaves. After an earthquake in early Imperial years, however, the roof is turned into an octagonal pyramid.
Externally seemed that the dome consists of two floors. A platform of two levels lead to the monument entrance to the south side and bottom of the building,which was a closed drum. The “second” floor was a psefdoptero by Doric pillars, which supported full Doric entablature. The openings between them closed in the lower part parapet, decorated a rosette between two bucrania and curtains.
Inside the Corinthian columns inherent integration with external pillars supporting an Ionic entablature. Among them, in correspondence with the outerparapet, altars decorated alternating pairs of flasks and bucrania.

The Palace is one of the most important buildings of the sanctuary, since it was the last and most complete in a series of buildings for the “Events” and “Grounds” of the first degree of initiation. It is built on the oldest building foundations, contemporary or little later of the Dome of Arsinoefrom whichpreserved only the lower part of the foundation and the western part of the south.

It is a rectangular building NorthWest-SouthEast orientation, which dates back to the early imperial period (around the 1st century ). In the westernfacade there were three entrances, of which the center was larger than the two smaller side ones. The walls of the building, which is on the south sideare maintained at a height of 3 m., and are built in the polygonal system on the facades, while the space between them was filled with pebbles.
Along the long wall of the building protruding internally eight pillars, four on each side, built with angled stones, which were used to support the roof beams while an intermediate wall formed on the elevated northern part of building an inner sanctuary, a small holy sanctuary, where the entrance was allowed only after the initiation. Two bronze statues of Kaveires with raised hands framed doorways that interrupted the wall of the inner sanctuary and perhaps underlie a wooden bulkhead that separated the sanctuary from the main hall.
The floor of the palace was earthen, while the interior walls and the pillars were coated with white plaster. The notches along the east wall and part of the north testify that there was a wooden platform. In the southeast corner of the main hall was one stone construction, which surrounded a pit libations, while the center of the room, near the eastern wall, detected the remains of a wooden circular pedestal. 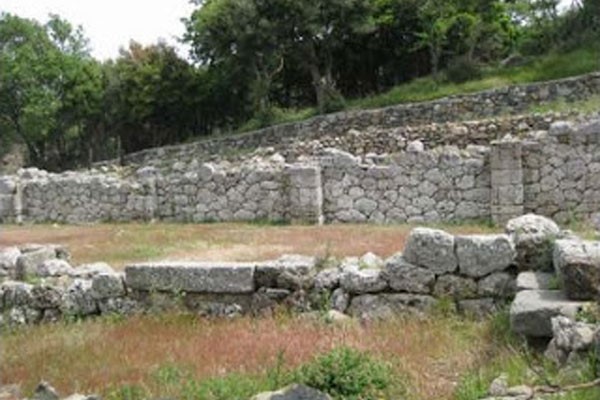 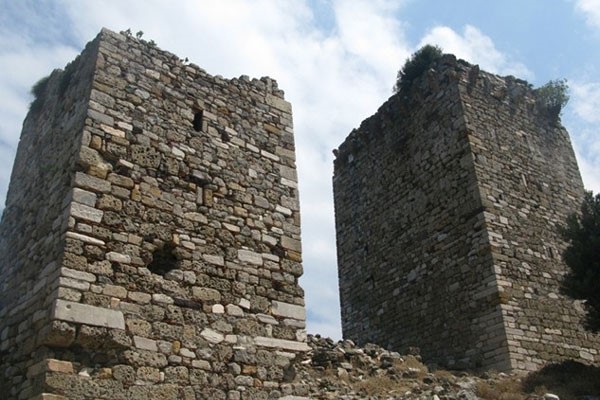 In Samothrace there are some of the greatest examples Late Byzantinefortress architecture in Greece. From the fortifications of Genoese Gateluzzi (or Gattilusi) survive today part of the Castle in Chora and three of the towers of the defense assembly built near the current Paleopolis.
Known as the towers of Gatelouzon are constructed partially with ancientbuilding materials from the nearby archaeological site and are 10×11,7 meters quadrilateral shape. One of the three, height 20m., Preserved almost intactwith integrated cornerstones bearing bossing the crest of Gateluzzi
Similar marble inscription of Palamidi Gatelouzon is fitted to the external wall of the castle in Chora dated 1433.
Also, at the mouth of the River Fonias, 8km. southeast of Therma, survived the so-called Tower Fonias, probably built after 1431. It has a square ground plan 11,5×11,5m. with preserved height 12m., while the walls more than 2 m thick., made of semi carved river stones.